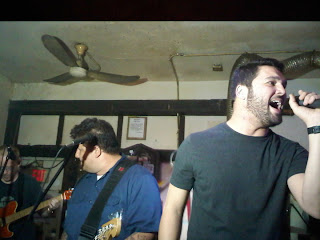 A spontaneous trip to Churchill's for last night's Hialeah Fest exposed us to some great bands, both old and new. For a $7 cover, we walked into the sounds of infamous Miami-based band Humbert. I've heard much about these guys over the years, but every time I was at a festival they were playing, I was in another area doing some sort of promotional hustle.

I observed the end of set from across the bar, peering through a sea of bad hairdos as I nursed my Jack and Coke. The band lived up to their hype: Catchy, dance-worthy indie rock. They're the kind of band you find yourself declaring you're totally in love with, halfway through the first song of theirs you've ever heard.  I'm glad I finally had the chance to see them live.

The stage was divided in two by a crudely hung white sheet, and as Humbert tore down, Low Visibility began their set on the opposite end of the stage. I honestly don't have much to say about these guys. The fifteen minute set rotations meant for me that they were sandwiched between Humbert, whom I had been excited to see; and Hit Play.

Hit Play is my friend and former 93 Rock co-worker Gaston de la Vega's band. They were the motivation for me to take my ass to Miami in the first place. The band kicked off their set with "...Progress, I Think?" from their debut EP "In Case of Emergency". Singer Alex Calente lead the band through a killer set that also included "The Lie Detector Determined That Was a Lie" and others. Equal parts power pop and punk, these guys deliver with catchy tunes that make you want to bounce and sing along, even if you don't know the lyrics. Of the four bands we saw, Hit, Play sounded tightest of all. They opened and finished strong, chugging through the fifteen minute set with as much energy as you would expect from an hour or more.

The last band we caught was Change Is Great. Giz Forte leads this Hialeah-based three piece with soulful reggae tinged vocals. The slow groove was a complete 180 from Hit Play; but a welcome change indeed. I'll definitely have to catch this trio again in a longer format.

Hialeah Fest was a great way to sample some local music, without having to wait impatiently though lengthy sets when a band you're not into hits the stage.
Posted by ErinLee93 at 10:34 AM