The Ear For A Single

Call it a blessing and a curse. When I hear an album for the first time, there is always one song that stands out to me above the rest. Whether it is an EP or a full length record, at least one song "speaks" to me. This often ends up being the one that receives radio airplay.
I've gotten a lot of hell for this ability over the years. My music snob friends like to tease me for recognizing the most popular and radio-ready hits. Everyone with decent taste in music knows the single is often the most loathed song on any album, as it gets overplayed ad nauseum by radio stations across the country. It finds its way into commercials, music videos, grocery stores, and bores a hole into your very soul. Sometimes it is mediocre when compared with the rest of the album. Other times it is so infectiously catchy, you can't help but love it.
As much as you love to hate most singles, these are the songs that are chosen to grab a listener and drive them to further explore the band's album. If the single is really good, it may even encourage a listener to delve into a band's entire discography.
I'm proud of my ability to hear an album and choose a song that I am confident will make a new band successful, or breathe new life into a band that is on the verge of a comeback.
Having this gift means I'm doing my job well.
What are some of your favorite singles? Least favorite? Is there a single you hated, but eventually ended up listening to and becoming a fan of the band?
Posted by ErinLee93 at 11:00 AM No comments: 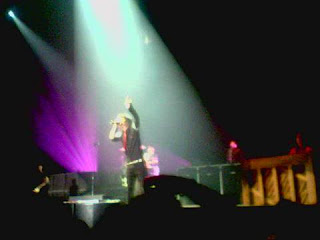 I was cruising home from work in my car today listening to music. I started thinking about some of the concerts I've been to over the years, and how the size of the room these bands are playing in directly correlates with what kind of performance they have.

Bands like Foo Fighters and Green Day are solid in an arena setting. I've seen Foo Fighters tackle the Bank Atlantic Center twice, and KILLED both times.
I've seen Green Day own both the BAC and The Triple A (American Airlines Arena).
Dave Matthews Band, Poison, and Disturbed are all fantastic bands to see on a sweaty summer night at the Cruzan Amphitheatre in West Palm Beach. The open-air structure sets the tone perfectly for a great night of acoustic balladry or balls-out rock.

The difference in playing certain venues becomes even more evident when it comes to local bands. I've recently seen Juke play a Beer Fest, Hollywood Bandshell, and The Poorhouse. Each performance had a different vibe. Beer Fest was high energy, Bandshell was laid back with a medium pace, and The Poorhouse was full of foot stompers, attitude, and an anything goes vibe.
My friends the Hep Cat Boo Daddies always play their best shows at The Hollywood Playhouse. There is something about that theatre that brings out the best in them as a band. All of the songs sound that much more soulful and real.
Conversely, choosing a room that your band is not suited for can provide disastrous results. I've seen multiple bands play Hard Rock Live in Hollywood with mixed success. Sometimes the sound is drowned or muffled, or the music gets lost drifting over the sea of people.
I enjoyed seeing Weezer at Sunfest earlier this year, but they're better suited to play in an arena, or even a medium-sized venue. Rivers Cuomo has been experimenting with becoming a more outgoing and impressive frontman, but I'd prefer to see him play a smaller room and stick to his traditionally awkward ways.
What are some recent shows you've been to where the band worked really well or really poorly in a particular venue?
Posted by ErinLee93 at 8:30 PM No comments: