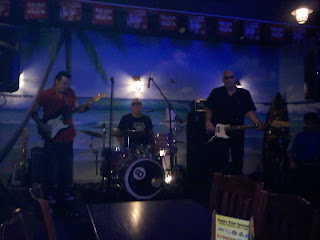 It's no secret the Hep Cat Boo Daddies are good friends of mine, so when I learned they were going on an indefinite hiatus, I made it a point to attend their show this past Saturday at Elwood's Dixie BBQ in Delray Beach. I stepped in halfway through a song, taking a seat at an empty table up front. I settled in with a Magner's, propping my feet up on the chair in front of me, readying myself for three sets of HCBD.

I focused first on Joel, watching him play and sing like I have done so many times over the years I've lost count. He played carefully, with alternating focus and ease. In a conversation we had after the set, I told him I've enjoyed watching him grow as a musician. He has become even more proficient of a player, and his stage presence is more electric than I've ever seen it.

I turned my attention to Evil, the bass playing embodiment of cool. Standing off to one side sporting his trademark shades, he makes playing look so effortless that I'd be tempted to jump up there and jam myself. He's always a joy to watch.


George is a fine addition on the skins, having replaced Randy Blitz several months ago. He was all smiles and even sang a couple of covers, including "Folsom Prison Blues".

By the second set, the boys started breaking out some tracks from HotRodSexGod, which did not leave my cd player for approximately the entire length of the summer of 2007. I tapped my bottle to the table in time with George's drums, singing along with Joel.

The third set was a half hour, anything goes impromptu jam with a roundtable of musicians that happened to be at the gig. Joel invited me up to sing a song, but I was caught off guard and didn't know what we'd all be familiar with so I declined. I'd gladly take him up on the offer another night, as sharing a stage with him would be my pleasure, indeed.

You can also check out Joel's new band: Joel DaSilva and the Midnight Howl
Posted by ErinLee93 at 3:01 PM No comments: 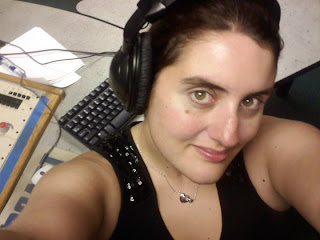 Last year, my friend suggested I check out "Warning", his favorite Green Day album. It was the only one I'd never heard, so I gave it a listen. I've heard it a handful of times over the last several months, but only yesterday did I pick up on the jingle bells in Deadbeat Holiday. As Billie Joe Armstrong begins the lyric: "Christmas lights in the middle of August", the bells chime in subtley. My ears perked up, and I admonished myself for not having noticed it sooner.
One of my favorite things about being a passionate music lover is discovering the nuances a band chooses to include in its music. Sometimes the choice is in the instrumentation, like the Green Day song I mentioned above. Other times, the choice is in the mixdown, when the music floats from the left channel of your headphones to the right. If you're a radio personality, the mixdown could send you into a state of panic. We often wear our headphones over just one ear. If the song starts in the left channel, as Korn's "Coming Undone" does, you'll flip out thinking you have dead air. Your heart skips a beat until the drums kick in, and you laugh at yourself for the mini freak out.
When I was younger, I used to spend an entire afternoon with my mom and dad's record player, headphones engulfing my tiny head as I pulled out the sleeve and followed the lyrics intensely. As an adult, the closest I can come to that is a car ride to work. I miss the days of devoted listening.
What are some of your favorite subtle music discoveries?
Posted by ErinLee93 at 7:05 AM 2 comments:

Bobby and the Renegades

I've had the pleasure of seeing Bobby and the Renegades a couple of times recently, and have yet to be disappointed.
Regardless of the size of the room or the number of people in the crowd, the boys play with the same level of intensity.
Comprised of members of hard rock band Beauty to the Moon and blues rockers The Helldorados, Bobby and the Renegades was formed just under a year ago.

Vocalist Greg Magnanti may be new to the group, but is clearly a good fit with the rest of the band. The ease and chemistry with fellow members is evident in his performance.

Guitarists "Mean" Dean Haddox and Steve Laudicina are fun to watch: alternately grinning and trading licks or getting swept away in a passionate solo that fills the room.

Drummer Harry Brooklyn and Bassist Mason Randall provide a solid foundation, keeping a steady beat for covers and originals alike. Their experience shines through in their playing, both members show a combination of precision and relaxed confidence.

It's a blast when everyone gets in on the fun, and the band's cover of Muddy Waters' Got My Mojo Workin' gets a crowd on their feet with ease.
On the other end of the spectrum, the guys wrapped up a recent set with Bill Withers' "Aint No Sunshine", a great match for Magnanti's vocals.

Join them on Facebook for upcoming shows: Bobby and the Renegades
Posted by ErinLee93 at 3:45 PM No comments: 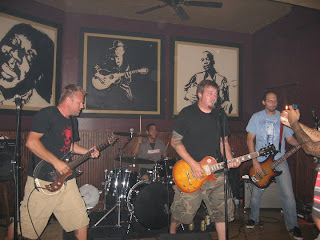 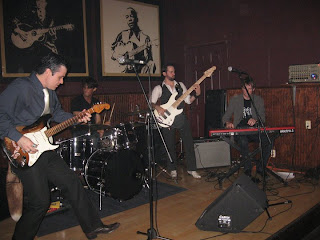 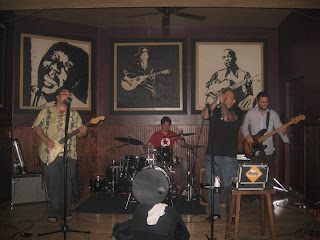 When you love as many local bands as I do, you're often faced with difficult decisions. How do I divide my time when attending local shows? Do I support my friend's band, or see someone new? Do I travel across county lines, taking a chance on a show that might be less-than-stellar? What's a music lover to do?
SW 3rd Ave fest was the perfect cure to my woes. I was able to see a bunch of great bands in Downtown Fort Lauderdale, close to home and in venues I love.

After chowing down on tacos at T-Mex, my friends and I made our first stop at the PoorHouse for Juke Singer Eric Garcia greeted me from the stage as we walked in, and it was like being welcomed home at the end of a long day. The band blew through a few blues tunes in what seemed like a split second, reminding me of my least favorite thing about festivals: short set times. It was a tease, leaving me mentally arranging my schedule to catch them later in the week, at The Stage in Miami.


After a quick load out, Joel DaSilva and the Midnight Howl took the PoorHouse stage. This lineup may be new together, but the members are hardly new to the scene. Frontman/Guitarist DaSilva is a member of The Hep Cat Boo Daddies, and drummer Stefano Rotati sat behind the kit for Juke. Bassist Kevin Simonelic rounds out the trio, along with Scott Rowell appearing on keyboards. The 'Howl is currently working on their debut album, set for release late summer/early fall. The boys sounded great, and the band was in good spirits coming off last week's big show at SunFest, alongside several national acts. A mix of originals and covers made for a fun set.


When J.D. and the Howl wrapped up, I grabbed a friend and walked over to the Green Room to see what was going on at the New Times Stage. I'd never seen a performance at Green Room, so I tried to find my bearings as John Ralston's band did their setup. I took in the decor (lots of white furniture!) and the crowd (music geek chic!) and determined I may not be cool enough for this place. John Ralston came highly recommended, and I was excited to see him perform. His band sounded incredibly tight, and I enjoyed his vocals and stage presence. I bopped around to the music for a couple of songs, but I was anxious to get back to PoorHouse for The Shakers.

The PoorHouse was packed for The Shakers, and they were already onstage when I re-entered.
The energy in the room was more intense than I've ever seen it at this venue. I couldn't help springing up and down like a pogo stick, letting the music move me for roughly two and a half minutes at a time. This was not my first time seeing the Shakers, and definitely won't be my last. These guys had everyone's attention, as the crowd bounced and raised their camera phones. An illuminated hula-hooper at the front of the stage lit the room with glowing swirls.


When the set ended, I stepped onto the street for some air, plotting my next move. It seems one group of my friends had convened at Fat Cat's, so I made the trek down the street for shots and good times. Justin Enco Band was playing a set strictly comprised of covers, and it made for a nice change of pace. We perched on stools on the sidewalk, starting a Sublime sing-a-long and talking about the night's events. The perfect way to wrap up a night of excellent music!
Posted by ErinLee93 at 7:12 AM No comments:

The Cure For What Ails 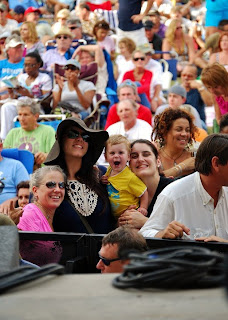 I've never been one for change. If things could stay exactly as they are, in my happy little routine, with no shake-ups or upheaval, I'd be completely content. But life is at times tempestuous, and I'm clinging to my ideals in a world that demands constant reevaluation. What's a slow-moving Taurus girl to do?

FOCUS ON THE MUSIC

The music is my consant. Even when it changes, it stays by my side; lifting my mood and supporting me in times of need.
Every morning I wake up with a song in my head. Sometimes, the song is a carry over from the previous day. Other times, it crashes my thoughts like a drunken partygoer, and I never fight it. I come to work and look it up on YouTube, then post the performance on Facebook to share with my fellow music lovers.

I focus on lyrics, finding the ones that suit my feelings best.
I focus on the bass line or the kick drum, wishing I had that kind of rhythm.
I focus on supporting my friends in their desire to play music to larger audiences, channeling their talents and passion into making their dreams a reality.

When you don't think anyone else can relate to what you're going through, share a song with them. You might be surprised.


Photo Credit: Kristina DaSilva
Posted by ErinLee93 at 7:36 AM No comments: