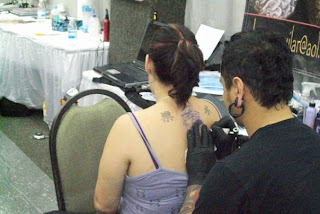 I don't think it's necessary to state this, but I'm going to anyway: I love music. Lots of kinds. I live and breathe it. I also love tattoos. I have nine of them, currently, and there may be more in my future. That being said, I've never wanted to have a tattoo that referenced or paid homage to a band. I have two music tattoos: A kanji symbol on my left shoulder and an eighth note on my right wrist. When it comes to specific bands, however, I just can't bring myself to get one permanently tattooed on me. Tastes change, people change, and though I don't think I'll ever stop loving my top few favorites...who knows? I've seen some very well done

band tatts, and I've seen some that were really gaudy and tacky. My husband has the artwork for The Clash's "Know Your Rights" album tattooed on his arm. I have two friends that have the Led Zeppelin "Zoso" symbols tattooed on them. All of those are really cool, I guess it's just not for me.

Do you have, or would you get, a band tattoo?