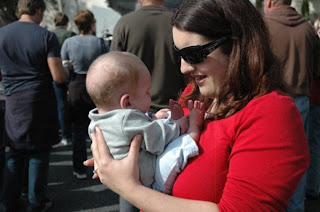 I took Jonas to his first concert yesterday. Hep Cat Boo Daddies were performing at Riverwalk Blues Festival in downtown Fort Lauderdale. We strolled in during sound check, and Randy's drums were too loud. Jonas was sufficiently pissed off, so we walked away from the front of the stage, finding a spot near the beer tent.
The band took the stage, and I was curious to see what my six month old son's reaction would be to live music. At first, he didn't seem to notice or take much interest. A couple of songs into the set, I took him out of the stroller so he could get a look at the stage and the band, as opposed to being eye level with every person's ass in the crowd.
The opening notes to "All My Life" drifted through the sea of people, and reached Jonas. Immediately his eyes lit up, and as the song progressed, he was smiling and laughing.
Apparently, we'd found Jonas's favorite HCBD song.
He seemed to enjoy himself for most of the set, until time started to take its toll and the overstimulation gave way to a mini fit.
This is just the first of many concerts to come, and I can't wait to see him enjoy more.
Posted by ErinLee93 at 9:44 PM