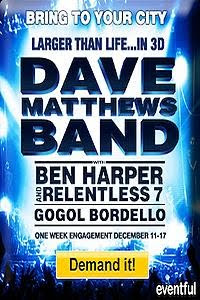 Larger Than Life: Dave Matthews Band in 3D is a live concert experience that debuted in theatres this week.
Featuring performances from Gogol Bordello, Ben Harper and Relentless7, and Dave Matthews Band; the viewer gets to attend a festival show without all of the sweaty fans and smelly port-a-potties.

Ben Harper turns in a laid-back performance, engaging the crowd with soulful tunes, and finishing his set playing a lap guitar.

The real stars of the show, however, are Dave Matthews Band. Highlights include "So Damn Lucky", from Dave Matthews' 2003 solo album Some Devil, and a cover of Talking Heads' "Burning Down the House".

Violinist Boyd Tinsley's muppet-quality looks are even more exaggerated on the big screen in 3D, and Dave Matthews' fancy two-steppin' footwork brings a smile to your face.

Larger Than Life runs through December 17th.
Posted by ErinLee93 at 10:33 PM